Wes Anderson's second animated feature is his most entertaining yet!

Isle of Dogs is the latest work of style-supremo Wes Anderson. It is his second crack at stop motion animation but this is a marked improvement on Fantastic Mr Fox.

You feel that Anderson wouldn’t have got back to stop motion unless he felt he had a great story to tell, and that’s true of this film. It’s a dog-based caper and is perhaps one of Anderson’s most fun and enjoyable movies to date.

I saw this in a cinema full of kids during the Easter holidays but I think it’s fair to say that this isn’t really a film for children despite the PG rating. There’s the usual sense of melancholy which doesn’t really chime for younger viewers but I think anyone can enjoy the incredibly detailed animation so perhaps I'm not the right person to say that.

And that is a great point to start on. The level of detail and thought that has gone into every frame is incredible. The Isle of Dogs is an abandoned island upon which all of the dogs in the fictional city of Megasaki are banished after an epidemic of dog flu breaks out. There are two narratives at play; one is a young boy's desire to find his pet dog which was sent to the island and the other is of the dog's desire to flee the island and overcome the dog flu. The settings are divided between this island and Megasaki city. The island is a place in decay, abandoned by humans and now serving as little more than a rubbish dump. The beautifully detailed mise-en-scene makes this animated world feel real and genuinely inhospitable. The city seems vast and densly populated and demostrates extensive research into Japanese culture and architecture. A couple of scenes which demonstrate this are one in which sushi is prepared and another where a kidney is transplated. It sounds completely inane but it is honestly staggering. It's probably the most I have been in awe of something in a film for some time.

You might be concerned by the fact that all of the human characters speak Japanese in the film without any subtitles. But Anderson deals with this intelligently. During the speeches, an interpreter, voiced by Frances McDormand sits in a booth as if to translate it to a television audience watching at home. Greta Gerwig voices Tracy Walker, a foreign exchange student, who acts as another means of translating the words of the Japanese human characters. It's hard to explain the ways in which Anderson achieves this but he does very well in making this accessible.

The rest of the voice cast is superb. This animated film gives the director a chance to work with many of his regular muses as well as a host of new talents. The actors' doggy doubles are perfect. Gondo is a rough around the edges gangster dog voiced by Harvey Keitel while Scarlett Johansson voices an immaculately groomed pooch.

The cast deliver some very funny dog-based lines - even for those like myself who wouldn't claim to be 'dog' people. Bryan Cranstone voices Chief, who is perhaps main dog of the piece. He repeats the warning 'I bite'. The way that Anderson maps human personality traits onto the dogs whilst they retain their canine characteristics has neither the cuteness of Disney nor the abrasiveness of Family Guy. They are melancholic muts.

For me Fantastic Mr Fox felt like a bit of a mistep for Anderson. The character and story was well loved and well known in its original literary form by Roald Dahl. With Isle of Dogs, Anderson has more creative freedom and uses it to create a film that has all the fun, adventure and wonderful camera work of Moonrise Kingdom or Grand Budapest Hotel. It does carry on in the vein of those films rather than Anderson's early work but that's no bad thing. There is enough there to please the hardcore fans.

As for the soundtrack, whilst there is only one pop song used in the film, the score is absolutely brilliant and more than makes up for it. I love the music in Anderson's films but I didn't find myself wishing for 60s pop over Alexandre Desplat's wonderful score.

Being released so soon after the awards season you know that this movie will disregarded by the big awards next season. But that's fine. This is a fun film which doesn't claim to be anything more. If you love Wes Anderson it is essential viewing, if you love dogs it's essential viewing or if have even just a passing interest in films and want to see stop-motion animation at its absolute peak then this is a must. If it isn't Anderson's best film, it is at least his most mainstream. 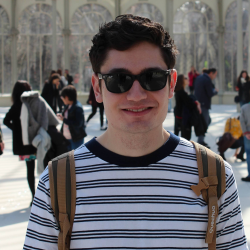